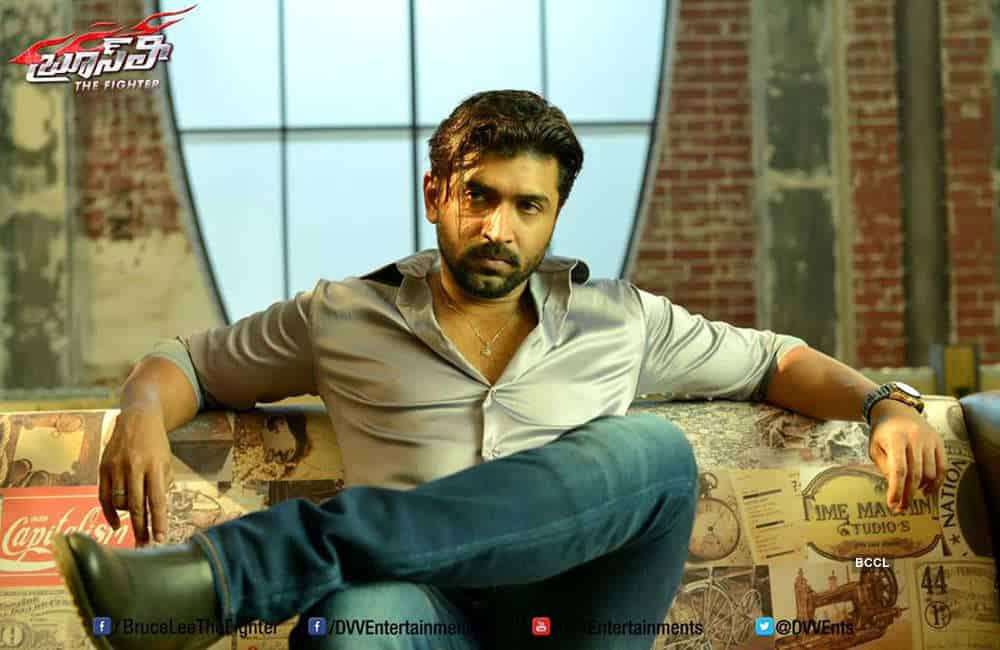 Allupdates site recommends you one of the upcoming craziest project in Ram Charan’s film career is ” Bruce Lee – The Fighter “.
This movie is planned to have its grand openings in the theatres on 16th october 2015 in telugu all over the world. Bruce Lee – The Fighter movie is a complete action entertainer directed by successful telugu movie director ‘SREENU VAITLA’. When his directing career is in top mode, Sreenu Vaitla is suddenly struck with a disaster flop movie ‘Aagadu’. So , he took Bruce lee as a challenging project to again enter into successful path.

Bruce Lee The Fighter movie will be an action-oriented movie with full of action elements involved in it. Famous Telugu actor who is considered as the “MEGA POWER STAR” Ram Charan Tej is appearing in the lead role in this movie. He is the only son of Tollywood all time legend actor “MEGASTAR” Chiranjeevi. Although Ram Charan entered into his movie career with his father’s fame, he proved himself as a talented one in his first movie ‘CHIRUTHA’. He break all tollywood records just in his second appearance in the role of ‘Kaala Bhairava’ in the movie ‘Maghadheera’, a sensation created by Tollywood leading director ‘S.S.RAJAMOULI’.

Ram charan first time tasted the failure in his third movie ‘ORANGE’, as it could not reach to the expectations of the telugu audience. Later he has several up’s and down’s in his film career but with the hits of ‘Yevadu’ and ‘Govindudu Andarivadele’, he is in his best stage in his career. Audience are expecting a lot of action from Ram Charan in this movie because of the movie title ‘BRUCE LEE’.
The latest Telugu Movie Review about a female lead role in this movie is played by the most-wanted actress in telugu industry ‘Rakul Preet Singh’. She has last appeared in the movie ‘kick-2’ was a flop at the box office as it could not reach the expectations of the audience. Inspite of negative talk on the movie, rakul preet earned a positive response for her acting. She also acted in tollywood hit movies like loukyam and current theega. She is also playing lead role in upcoming Sukumar’s prestigious movie”Nannaku Premato”. In this movie, she is pairing with jr.NTR. Rakul preet is expecting “Bruce Lee The Fighter” movie to be the biggest hit in her career because of the high expectations on this movie and also Pawan Kalyan’s ”Teen Maar” Movie fame Kriti Kharbanda doing major role in this Movie.

Music for this movie was composed by S.S.Thaman. At the early stage of movie making, famous Tamil music director ‘Anirudh Ravichander’ (kolaveri di famous) was expected to be the music director for this film. Later, because of some unknown reasons , Thaman was given the chance of directing music for Bruce lee Movie. Recently released audio of bruce lee the fighter movie is getting a huge response from the audience. It will be remained as a hit movie in the career of thaman. DVV Danayya is producing this film under the banner of DVV Entertainments and the movie script & dialogues are written by ‘Kona Venkat’ and ‘Gopimohan’. Sceenplay is done by Sreenu Vaitla himself and cinematographer for this movie is taken by the ‘Manoj paramahamsa’.