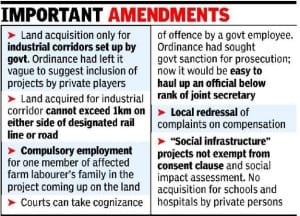 Lok Sabha on Tuesday passed the land acquisition bill after a marathon debate, with the government managing to keep its allies together though it failed to rein in Shiv Sena.

The government now braces for a tough battle in Rajya Sabha where it lacks majority, as evident in the near-unprecedented event of its humiliation by the opposition which forced amendments to the motion of thanks on the President’s address.

For the ruling coalition, the good news is that it managed support from Akali Dal which had criticized the law and insisted that the “consent clause” be restored, as also LJP. While Shiv Sena stuck to its guns to not vote for the bill, it stopped short of voting against it and merely abstained.

Importantly, Biju Janata Dal, which was scathing in its comments and had termed restoration of “consent clause” and “social impact assessment” as non-negotiable, staged a walkout instead of voting against the bill.

Not restoring “consent” in any form, the changes to the bill limit industrial corridors to one kilometer on both sides of highways and railway lines, provide for compulsory employment to one member of the affected family of farm laborers, provides for readdress of grievances at the district level and prescribes that states determine that acquisition of land for a project is bare minimum.

The dropping of exemption to “social infrastructure” projects was dictated by the argument that private individuals could misuse it to open colleges and hospitals.

The opposition moved 52 amendments which were either negated or were not pressed by the members. Later, Congress, SP, TMC, Left and others walked out to let the bill be passed by a voice vote. Congress chief Sonia Gandhi was not present during the debate.