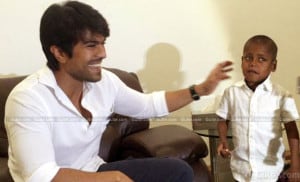 This incident happened at Ram Charan’s palatial home in Jubilee hills. The other day, an eight year old kid Parasuram got to say few dialogues from “Magadheera” in an impressive style. He amused audiences before by delivering the dialogues of magnum opus “Magadheera”.

After a while, when he started delivering the dialogues from “Legend”, he suddenly stopped saying ” Legend dialogues cheppakoodadu ( I should not say dialogues from Legend).”. To which, Cherry bursted out. The kid has been told that he shouldn’t utter any dialogues of other heroes before Ram Charan Tej.

Cherry with maturity, ” Why not Legend dialogues? I like Balayya a lot. Tell me more. I like them”. To which, the boy replied, ” Nenu Voter ni kaadu, Shooter ni” and made everyone cheerful. Cherry should be applauded on this occasion for being so diplomatic considering that after all, everyone out there are mere actors. Way to go, Cherry.